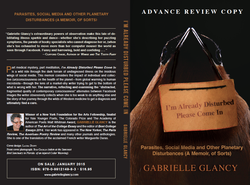 The Advocate listed Gabrielle Glancy's book, I'm Already Disturbed Please Come In, as one of the top thirty books you may have missed in 2015.

Ever hear of Morgellons syndrome? (If not, Wikipedia it and you’ll be fascinated.) I’m critical of the American health care system as much as the next gay, but partway through poet Gabrielle Glancy’s fascinating hybrid medical memoir I’m Already Disturbed Please Come In (Oneiric Press), I was convinced she had some sort of similar parasitic delusion, which is why no doctor could find it. In the book, the author battles an undiagnosed illness and baffling collection of symptoms while obsessively dissecting social media, interspersing short but thoughtful essays with ER visit accounts and Twitter reactions. The partial sound bites work, though, and I read the book cover to cover twice in one day — something I’ve never done. Glancy’s take on the intersections between climate change, dwindling natural resources, autoimmune diseases, viruses, and microbial imbalance in our own bodies is assured, fascinating, and terrifying. And all too real.

Acclaimed poet Gabrielle Glancy, has emerged at last with a strikingly original memoir, among the best works of prose I’ve read in years. It’s a harrowing (and sometimes hilarious) tale of her descent into and eventual emergence from the alien and alienated worlds of illness and contemporary health care. It’s also a subtly brilliant meditation on the social – or asocial – world of medicine’s strange but very relevant intersection with the infectious world of social media (Facebook in particular). No one yet has explored this territory so carefully or so well. Glancy is the Sebald of the virtual world (though her prose is more intimate, fresh, and witty). Her sentences again and again stopped me in my tracks. This book is more than worth the wait. It’s a wonder.  Robert Marshall, author of A Separate Reality


At times devastating, often humorous, and always honest, I'm Already Disturbed Please Come In is an original memoir about a dark period of inexplicable illness. Glancy finds both grace and levity in her human and heroic struggle.  Ivy Pochoda, Author of Visitation Street, Amazon Best Book of 2013 and The Art of Disappearing


Part medical mystery, part social media pictogram and part short but thrilling ghost story, Gabrielle Glancy's compulsively readable memoir is about many things.  But at its core, it is a funny and beautiful meditation on why she isn't getting any better and a world that can't answer her because it isn't getting any better either.  At the well traveled intersection of almost giving up and deciding to live (beyond expectation?), Glancy has given us an extraordinarily fierce and surprising book.  Michael Klein, author of The End of Being Known


Like a modern Zola, Glancy writes a ferocious J’Accuse against the American healthcare systems and its apparent inability to help a single human being.  Illness is terrible, but sometimes it allows the poet among us to describe the sublunar city she lives in with unearthly, post-human beauty.  And though her body is stricken, and she veers into mental collapse, somehow her heart and soul manage to triumph against the odds Kaiser had so blithely established.  It is a love story, as well as a revolutionary paean.  Kevin Killian, Author, Editor, Playwright, The Collected Works of Jack Spicer


Glancy’s exquisitely crafted book is at once medical mystery, urgent love story, and vital social inquiry.  What brings these elements together is Glancy at the memoir’s heart:  her physicality, her sense of humor, her generosity of spirit, her willingness to look long enough to be amazed.  A working single parent suffering debilitating illness, Glancy resolutely seeks a diagnosis, and through the pilgrimage of her mind-body we glimpse our own struggles. From beginning to end, we root for the author, for the young woman she falls in love with, for their sons, for the family they hope to become.  Brilliant, sexy, troubling, funny—this swift-paced memoir with its collage of Facebook doozies and medical mishaps is disarmingly funny—I'’m Already Disturbed Please Come In entertains as it interrogates, challenges as it invites us inside.  Beth Bosworth, author of The Source of Life and Other Stories (Winner of the University of Pittsburgh Press, 2012 Drue Heinz Prize)